Last Friday I mailed my candidate reply form to NYU declining their admission offer. I can’t tell you how many emotional evenings I spent weighing the pros and cons, complaining to Corner about how difficult it was to decide, and even pressing him to make the decision for me.

I went to the ITP space with Cemre (a new friend that I met on the StartupBus) and spoke with several current students. I submitted a financial aid appeal to NYU, only to be told that the amount I was asking for was not do-able.

I suppose in the end, it was an easy decision. I was basically begging NYU to let me walk away with $50k in loans instead of $80k, but now I’m going to have no loans (after I pay off the last $6k from undergrad, that is).

A few things I learned from the grad school application process:

Interviews count. A lot. I had an interview with SVA, and I was feeling terribly inarticulate that day (it didn’t help that my interview was on a Friday afternoon after working a 40-hour week and I was 3 days away from leaving for SXSW on a bus). I think my mind was elsewhere and it showed. SVA ended up being my only rejection.

Having residency in a state can be a big financial help. Even if you are applying to private schools that don’t offer a discounted in-state tuition rate, you may qualify for aid from the state government. I, however, have been moving around way too much.

Be nice to the admissions coordinators. They can help you.

Talking to current students really helps. Chances are, if you think you have a “unique” situation, another student is in the same boat. Learn about the current students and how their situations might apply to you. I had the opportunity to speak with an ITP student who attends the program part-time. Most ITP students are required to attend full-time, but he was exempt from this requirement since he is employed by NYU. Since I have a background in higher education, I was curious if it might make sense to seek employment at NYU and attend grad school using their tuition remission benefits. The student I spoke to provided very good insight, claiming that it did ease the financial burden, but he felt like he wasn’t getting as much out of the program as those who are attending full-time. This information was extremely useful to me, and it was easy enough to get just by asking around.

I will probably be going through the process again at some point in the future, since getting a Masters degree is something I want to do. For now, I’m going to work on saving money, relaxing, and being happy. All good things, no? 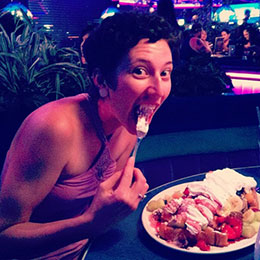 I’m Kristen. I am a blogger, web designer, social media addict, and lover of all things digital. I live in Washington, DC with my husband (Corner) and our dog (Nigel). I am a runner and a recently retired roller derby skater. In addition to fitness, I enjoy food, bubble tea, and video games.
Kristen M Byers